Yeah, we do this raid once a week and it’s one of my favorites, so you can expect a post on it each week up until the point we stop doing it.

I arrived into the raid late, but thanks to the new world-wide invite and zone in/out system, it was no problem to get me into the group. We messed around with the watcher and some other mobs for a change at the start to get a feel for how that part of the raid works. After that, we went back down inside to start taking down the named mobs. Loot was reasonable, although not nearly as good as some other nights. We all played hard and got through a ton of encounters without too much hassle.

The big time came when we went after the Punisher (I think?), name starts with an H. This guy was a chump once we had a solid strategy and we took him down with half the guild naked. That’s the thing about raiding, each new encounter is at first a learning exercise. After we’ve figured out how to best attack the encounter, it becomes (almost) trivial. Mind you, strange things always happen (like in MotM the other night, go figure) due to changes in groups, so you can expect things to be perfect every time.

We had some decent drops, and I got an amazing fabled breastplate (reinforced brigandine chestguard) that has awesome STR/AGI. It’s nice to see some good scout items drop and even nicer when the guild decides to bestow them upon me. 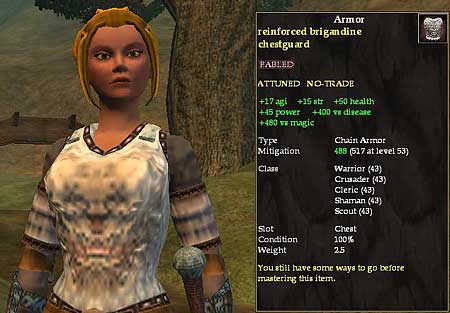 On another note, the newest members of our guild are working out great. Last night we had 24 members in zone from start up until around 2 AM. That’s an amazing turnout compared to earlier attempts where we were left with 18 or so members after midnight. It’s good to see more left coast folks joining the guild to be able to handle raids for a longer period of time each night.