I’ve added a few new links to the site, mostly those geared towards the Subaru WRX. I recently purchased a new 2007 Subaru WRX STI in World Rally Blue with the gold BBS wheels. It’s a blast to drive. I got it the day before the big ice storm hit Tulsa, so it’s been easy going on the roads with very little throttle. I can’t wait until the weather clears so I can open it up.

I’ve wanted a WRX since they were introduced in 2001. However, the road has been a patient one. My first test drive left me less than impressed, with a lackluster interior, poor braking and some hit-or-miss options. Since I already had a nice Toyota MR2 Spyder Convertible, I wasn’t really ready to take the hit on a new car so soon after getting the Spyder. So I waited.

Then I heard that the STI was coming to the US and got real excited. However, the first iteration with no stereo and limited options seemed to not fit what I wanted. Plus the body was the same as the WRX, which was a tad narrow here and there and wasn’t yet refined. So again, I waited.

Fast forward to present day. The 2007 model is the minor redesign and had a lot more options (including some really large wings), better seat comfort, automatic climate control, a decent stereo, and the right things added/removed to make it appealing. The power is a solid 294 HP (new S.A.E. method, which is over 300 in the old system), same all-wheel drive with RE070 summer tires, water spray for the intercooler (it’s 27 degrees outside, I have yet to use it), and a sweet dashboard.

I was sold after sitting inside. The drive was purely icing at that point. So far it’s been easy driving around our ice covered roads, but caution is always at the front of my mind. Imagine my shock when the insurance was less than my MR2 Spyder. So it took nearly six years, but I finally joined the Subaru family with a solid member of the Impreza family. 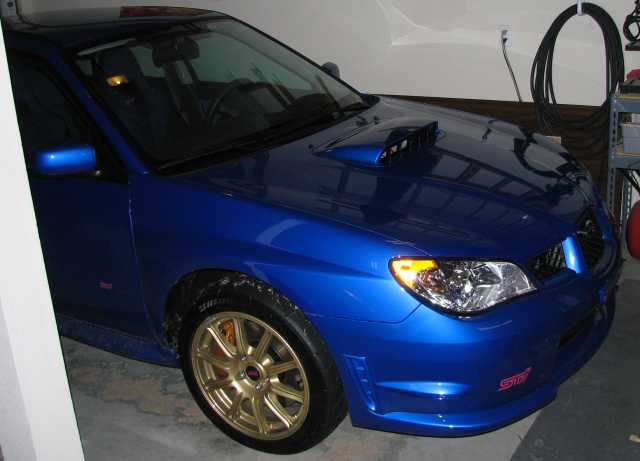