We did Lyceum again last night. The run was smooth, quick, and not bad considering up until the end we only had three groups. We had three people join us for the final guy, who went down on the first try. Some pretty slick items dropped, including the Armguards of Dread which were given to me. A nice upgrade from the Drape in terms of mitigation, plus I need more wisdom and these have +30 WIS on them. So it’s a nice upgrade indeed, considering I’m at the agility cap when in raid.

I think we’re doing the Halls of Seeing tonight and Friday night is Deathtoll again. Maybe that means we’ll do Lab on Saturday. Which would be cool, lots of relic drops in that zone. 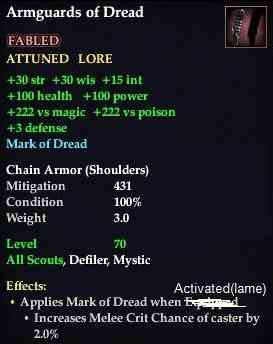